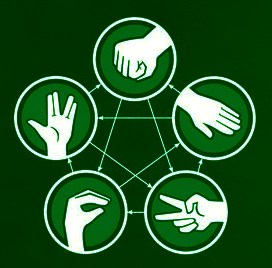 If you follow the link, you’ll get to a Google Play application that allows you to play the (in-)famous RPSLS (Rock-paper-scissors-lizard-Spock) game. Why that tweet stroke me is that I had already played (with code !) around that game a few months ago…

Although this is just a variant of the classical rock-paper-scissors game, the two additional gestures shift the number of gesture combinations to 25, as shown on this matrix:

There could be several ways to test these different combinations, for instance using the previous matrix as a reference, but… come on…. a closed set of values, and a simple behaviour… That’s just a perfect candidate for an enum ! And the best part is that I have actually implemented this as a test two months ago (proof on Github !).

Then we define the Gesture class and its values :

The behaviour can then be simply implemented based on the integer values of the enums :

Now we can write the tests in a very expressive way :

So… here is my answer to Leonard :

@TheRealLeonardH I have and android phone, but when I’m bored I think about software, and sometimes blog about it : pirrmann.net/rpsls-rock-pap…